COVID NOTE: The sanctuary is open to the public on Tuesdays 1-4 and Wednesdays 10-12 for silent meditation or prayer.
Facebook
Youtube

About The United Ministry of Aurora

Our 19th century sanctuary sits on the shores of beautiful Cayuga Lake, along with a social hall, playground, labyrinth, and chapel.

We are a diverse community of seekers and believers, following the teachings of Jesus, knowing that to love God is to love each other and God’s creation. We seek a deeper relationship with the divine and sacred through the Way of Christ.

We are enthusiastic about service to others and about thanking God for our blessings. We try to address systemic injustice in our world by following Jesus’ commandment to care for the least fortunate among us and by working toward justice in our community, nation and world.

Join us on Sunday morning for a traditional service in our historic sanctuary, or outdoors by the lake in the summer. Come for one of our enriching concerts, presentations, book discussions, or sharing sessions.

Our lakeside chapel and labyrinth are open to the public for prayer and meditation.

No matter where you are on your journey, you are warmly welcomed, regardless of belief, race, national origin, religion, gender or gender identity, political views, or sexual orientation.

“Teacher, which is the greatest commandment in the Law?”

Our custom designed 22-rank Moeller pipe organ was installed in the choir loft in 1971. On almost any Sunday morning, you will hear an organ prelude, several hymns, and a postlude played by Scott Gross, our organist.

The English Gothic home of the United Ministry of Aurora was built in 1860 by the congregation of the Aurora Presbyterian Church – and is a landmark within the nationally registered historic district of the village.

The Aurora Presbyterian congregation incorporated in 1811 and in 1818 erected “a wooden building with a tall slender steeple” on this site. That church, thought to have been designed by Jacob Hovey who also designed the Masonic Temple, was dismantled and its lumber sold to help finance our current structure. Joseph C. Wells of New York City was its architect and Samuel D. Mandell, local master builder, directed its construction. Bricks came by barge from the Carr brick yard about four miles north on the lake, and the limestone was quarried near Union Springs. The bell tower was added in 1864, and the clock was installed the next year. Henry Morgan purchased two round windows in 1867 from The Royal Glass Painting Establishment of Munich, Germany. The other fine painted glass windows were created in the Charles J. Thurston studio in Buffalo, NY. These arrived late… and were “installed by moonlight by the men of the village” the night before the dedication of the church.

St. Paul’s Episcopal parish, established in Aurora in 1835, joined with the Aurora Presbyterian congregation in 1969. The parish relinquished its church building, now a private home, south and across the street, which had been designed and built by Samuel D. Mandell. The members of St. Paul’s brought with them three fine stained glass windows that were installed in the South Annex and three bells that now hang in the UMA tower. These three bells, one of which is dedicated St. Ursula, the patron staint of to school-girls, combined with the steeple’s original “G” bell make a perfect chord. Our combined congregations celebrate a tradition of welcoming all people regardless of their beliefs. 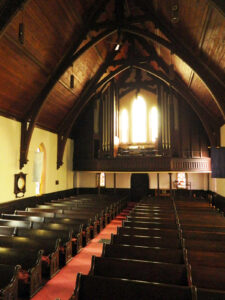 The church interior underwent renovation in 1970 at the time of the congregational merger. The original central pulpit was replaced with a divided chancel, but much of the sanctuary’s original character was preserved. The pews still carry the silver nameplates of early members who purchased their seating. The brass Civil War memorial plaque and two marble portrait medallions by Erastus Dow Palmer, a noted sculptor, enhance the side walls. One of the medallions is of Samuel D. Mandell, and the other of Salem Town, educator, author, and long-time director of the Aurora Academy. Our custom designed 22-rank Moeller pipe organ was installed in the choir loft in 1971.

The South Annex, built in 1910, houses the church offices, Sunday School rooms, and a kitchen. It also provides meeting space for church and village gatherings and is home to the Aurora Preschool and all its activities.

Just north of the church is the Memorial Chapel of the Nativity, given and furnished by generous members of the community in 1978. It is used for meetings and small worship services and houses an antique Italian creche which is displayed during the Christmas season. 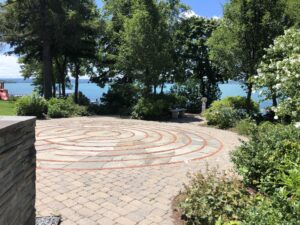